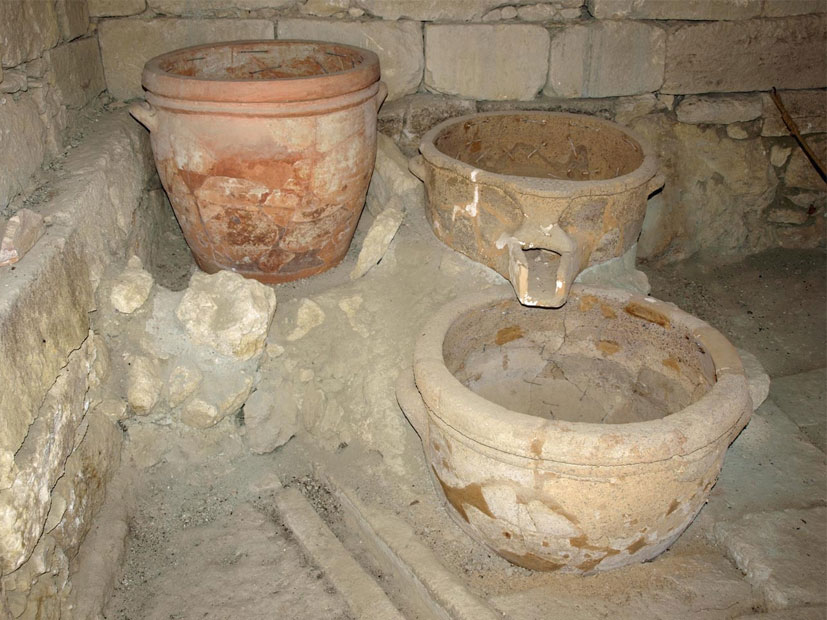 Wine holds a special place in the heart of all Cretans and it is connected almost with all occasions of everyday life. The actual period in time that this blessed product began to be produced in this island remains unknown. The formal accession of Crete in the «wine cultures» is marked in the mid 3rd millennium when charred seeds, stems and skins were found in the early Minoan settlement of Myrtos, in a large goblet and an earthenware jar. They were put in the earthenware jar to contribute to the fermentation of the must.

A similar connection is also certified through the Aegean epigraphic testimonials of the 2nd millennium, where wine is frequently mentioned by the Mycenaeans with the Greek word woinos. But more often it appears with ideographical Cretan hieroglyphics, linear Α and linear Β, on signs and stamps than in Minoan earthenware vessels which obviously contained it. The production of wine is also proven by the stone wine-press of Vathypethro, a Minoan villa which is situated between the «Emmanuel Michalakis Estate» and Arxanes, dated around 1600 BC. Other than the wine press the archeological research brought to light vinifciation facilities and warehouses for the storing of wine where earthenware vessels were used for its storage.

The production of wine played an important role during the Minoan civilization and Crete was one of the main wine producing regions of the time. Amphorae with sweet drinking wine arrived with the Mionoan ships throughout the Mediterranean world. They were transferred from the Aegean islands and went as far as Egypt and Lebanon. The Cretan wine had experienced a considerable growth during the Roman times with the famous Cretan passum. At this time there were many pottery workshops in the island whose main work was the craft of clay pots (vessels) for the transfer of wine. Pieces of these vessels have been found in many cities on the Mediterranean coast proving Cretan exporting activities of the time.

The idea that Crete was in good financial condition during the early Christian period it is concluded by the Arab’s saying ,conqueror Abu-Hafs Omar who described Crete as the land where honey and milk flows. The residents continued to work in the areas of viniculture and vinification even through the Byzantine Era. During the first 8 months of the year 1271, only one notary, Pietro Scardon, recorded wine transactions of about 6800 mistata (95.200 lt), more than 68000 okades (87.040 lt). The price of Cretan wine on the other hand was much higher than the price of the wines of Rome in a proportion of 1:1,6 (Br. Imhaus).

A reader of travel stories in Crete is sometimes under the impression that the travelers who visited Crete, along with their desire to explore the island, get to know the people, visit the monuments, see the flora and fauna, had the burning desire to try the famous Cretan wine and especially the famous Cretan Malvazia in the land of its production. Felix Faber (1483), Jean Palerne (1585), Villamont (1600) and many more make extensive references concerning the value of Cretan wine. In 1590 the German Sommers writes: «the island is famous for its wine and honey trading. The Liatiko wine is bought 3 crowns per barrel and Malvouazias for 18. The Rethymnian is the best Muscat wine. But the best Malvouzias and the best Liatiko are cultivated in the Handakos region» (Handax being Heraklion and Malvesin being Malevizi, a province of the Heraklion prefecture).

Since then, the Cretans continue to take care of their vineyards and their wine with the same dedication. The climate and the soil of Crete has always been the ideal ally. The cool winds of the Aegean in the North, the mount Psiloritis in the South that holds the warm winds from Africa, the fertile land and the special varieties, have always given to the Cretan vineyards that unique personality that distinguishes Cretan wine.

You can find out more about which cookies we are using or switch them off in settings.

This website uses cookies so that we can provide you with the best user experience possible. Cookie information is stored in your browser and performs functions such as recognising you when you return to our website and helping our team to understand which sections of the website you find most interesting and useful.

Strictly Necessary Cookie should be enabled at all times so that we can save your preferences for cookie settings.

If you disable this cookie, we will not be able to save your preferences. This means that every time you visit this website you will need to enable or disable cookies again.

This website uses Google Tag Manager to collect information such as the number of visitors to the site, and the most popular pages.

Please enable Strictly Necessary Cookies first so that we can save your preferences!